Brian has always had dogs in his family, whether that be his parents’ miniature poodle or his sister’s ex-breeding rescue German shepherd and from an early age developed a fondness for guarding breeds. He said, when he was in a position to do so he would have a Doberman. This ambition was realised with his first puppy Kiai. Shortly after followed rescue German shepherd Jazz who was instrumental in starting Brian’s journey in dog training and behaviour. Due to the traumas she experienced in her puppy stage, Jazz required managing and so Brian’s training in dog training and behaviour began in order to support Jazz. In the twenty odd years that followed, he rescued several Doberman and worked with a London based Doberman rescue charity.

More recently, he has taken a different direction with the addition of Gorgi, a working springer spaniel to the family. Brian loves training and walking dogs, watching them learn and develop and enjoys working with them as a team. This team has proved very successful earning certificates of merit, a novice handling and finally first place in a novice AV Spaniel working test.

Brian currently shares his home with two rescue Doberman, two working springers raised from puppies and a most recently (with thanks to Shaun Ellis) a malinois. 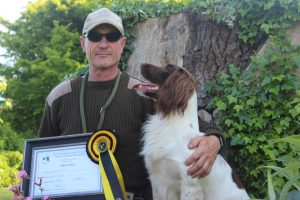